The Tetris Effect is a weird brain thing that can happen when you concentrate a lot on one activity. Named after the box-alignment game Tetris because of its repetitive and compulsive nature, it’s a pretty unpleasant sensation.

If you can’t relate, I’ll try to describe it. You’re lying in bed trying to fall asleep but no matter what you do, you can’t stop imagining playing Tetris. Apparently it can influence you during the day too, when you start making Tetris patterns out of things you see, stacking and aligning supermarket items or buildings.

I am prone to this, and probably noticed it first when I became obsessed with playing some Flash game version of Tetris as a student. I had a world of the Internet at my disposal, countless high-tech games, millions of pointless Wikipedia articles, and I sat there playing Tetris. I was useless at procrastinating. I had to stop when the Tetris Effect started. 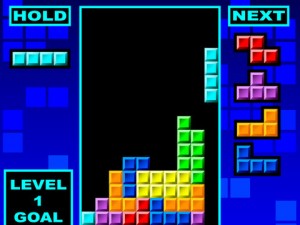 You can easily get it with other things, and I get it with a lot of games. Fable II is another one that stands out in my memory. That one isn’t as bad because I’d secretly love to be the hero in Fable II.

Recently, it is happening with web design. You’d think it doesn’t make sense, because it’s not particularly repetitive, but I suppose it’s to do with the concentration. If I stay up late working on something, I often cannot stop imagining making web pages, which has to be the most deathly dull personality trait you could imagine. When I finally manage to fall asleep, I usually dream about it too.

Now, I know nobody likes to hear about someone else’s dream, but last night I dreamt that someone wanted a page about their horses, and was demanding a tiled background of horse faces. I tried to protest that this wouldn’t lend the elegant appeal they so desired but they were having none of it. In the end I gave them their tiled horse background. I woke up in a cold sweat and had to go play some Tetris to calm me down. Only joking, I of course mocked up a tiled horse background, just to see. It looks great:

If you ever ask for something like this, you need to take a long hard look in the mirror

Want to join the discussion?
Feel free to contribute!